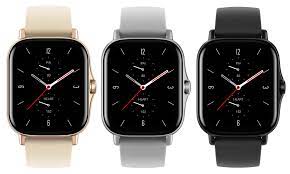 Amazfit a Budget smartphone maker is gearing up for the launch of its new GTR and GTS watch. The company confirms that it will launch the new GTR3 in China on October 12. Moreover, at the event, the company will also unveil the new GTS 3. The brand, however, did not reveal many details about the upcoming smartwatches. Both smartwatches are expected to launch in India soon after the China launch event at the moment. In addition, the Amazfit GTR 3 and GTS 3 are expected to feature similar internals. However, both smartwatches are likely to offer different designs.

Amazfit launched the GTR2 and GTR 2 with fairly similar internals. However, the smartwatches came with a different design. While the GTR 2 has a square-shaped dial with curved corners. Moreover, there is nothing officially confirmed regarding the specs and features of the two smartwatches. However, we may expect Amazfit to launch the GTS 3 and GTR 3 with some upgraded internals and new features.

The GTR2 came with a 1.39-inch AMOLED screen that has 450 nits brightness and 100 percent NTSC high color saturation. Moreover, the GTS 2 offer a larger 1.65-inch AMOLED display with a 348*442 pixel resolution. Both the watches come with a bunch of sensors like real-time heart rate monitoring sensor, Blood Oxygen SpO2 sensor, sleep tracking sensor, and more. The smartwatches also support more than 90 workout modes including the basics. In addition the GTS 2 houses a 246mAh battery and GTR2 houses a larger 471 mAh battery. Both of them are compatible with smartphones running Android 5.0 and later or iOS 10.0 and later. The GTS2 and GTR 2 are currently available in India for Rs 12,999, whereas the GTR2 classic Edition can be brought for Rs 13,499.