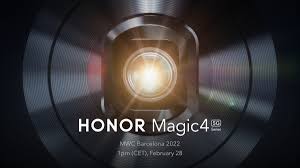 Moreover, the upcoming Honor Magic 4 series will get power from the latest Snapdragon 8 Gen 1 processor with Adreno 730 GPU. In addition, the device’s processor will have X2 Core cortex clocked at 3GHz. Along with, it has three cortex A710 clocked at 2.5GHz and four cortex A510 clocked at 1.8GHz. However, other than this there is no details regarding the series at the moment. But, we may expect the company to officially unveil the device details ahead of the February 28 launch date.