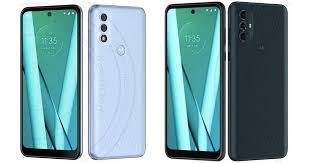 Motorola is all over the news for its back to back launches and the upcoming lineups. After the G51 leaks, the new Motorola smartphones is now emerging online. The device with model number XT2165-3 appears on the United States of America FCC listing along with WiFi Alliance certification sites. Moreover, there is an official renders of this smartphone giving idea somewhat about its design as well as offerings. However, the real name of this model number device is not out yet.

The Motorola XT2165-3 render images reveal that the device will be available in two colours. It includes a light blue shade and a darker blue/green/Black shade. Moreover, the design includes striated pattern on rear side including the Motorola logo into it centrally. The logo will be higher at the rear side near the camera module. In addition, the logo will also be on the fingerprint scanner. The image also reveals the triple camera at the back with an LED Flash. Furthermore, the front panel houses camera in centrally drill hole. The key volume and power button can be seen on the right. Talking about the earlier reports from US FCC listing and the WiFi Alliance listing, there are many details about the device. The listing reveals that the upcoming device XT2165-3 will have 4G connectivity instead of 5G. This hints that the price range of this smartphone will be under budget, not the premium one.