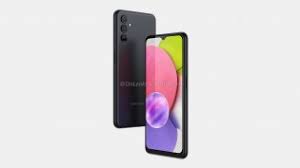 Samsung is working to bring the next A series Smartphone under moniker Samsung Galaxy A04s . Moreover, this upcoming device is successor of the previous device Galaxy A03s. In addition, the device appears on Geekbench certification website hinting at its imminent launch. The listing reveals the RAM, OS version, alongwith processor details of the upcoming A series device. However, there is no word from the company regarding the launch of the upcoming smartphone.

The company is gearing up to introduce the upcoming Samsung Galaxy A04s very soon. Moreover, the device with model number SM-A047F appears appears on the Geekbench certification website hinting at its imminent launch. In addition, the listing reveals that the device will run on Android 12 with OneUI 4.0 skin out of the box. As per the listing, the device will get power from an Octa-core Samsung in-house Exynos 850 processor with 8nm fabrication chipset. Furthermore, the processor will couple up with ARM Mali-G52 MP1 GPU. The variant on the Geekbench listing carries 3GB RAM support. However, there are chances that the device will carry more Storage and RAM configurations.