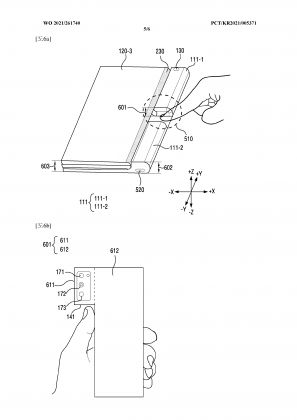 Samsung is now working on another foldable device whose patent is now permitted by the World Intellectual property organization (WIPO). The patent showcases a foldable smartphone design, but this time it is different from old foldable device. Moreover, the patent reveals that the design of the foldable smartphone will have double folding mechanism. In addition, the patent shows a device will have three parts collapsing to form a single form layout. The device will be somewhat like Samsung Galaxy Z Fold 3 with additional folding layer. Furthermore, the primary foldable display covering outer layer of the upper panel. And, collapses as the Z-shaped layout.

Moreover, the double folding design will have three parts featuring a bridge of sorts. It is similar to that of the Huawei Mate X foldable smartphone. Moreover, the bridge appears to host a USB TYPE-C for charging. As per the patent image, the upper half of bridge will have camera module that extend out of the phone, or flips outward enabling the full, main camera module. In addition, the patent shows the triple camera module design. However, it is subject to change so there may be chance that in future the camera module are subject to change. Furthermore, the patent shows that company has two layers for double folding display alongwith a camera and bridge part.