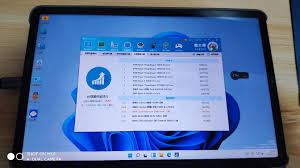 Xiaomi earlier brought the Windows 11 ARM to boot on Android running Xiaomi Pad 5. Moreover, in the recent development, there is another device that is working better on this window with some improvisation. In addition, the Geekbench certification website shows of the score of the Window 11 ARM tablet. As per the listing, the Xiaomi Pad 5 runs on Winow 11 ARM64 pulled off the score of 464 in single core test and 1992 in multi core test respectively. Furthermore, the developer of Windows 11 ARM with username @paluRookie suggest that there is some issue with PEPs drivers at the moment. Thus, the GPU is non functional as the driver is not proper. However, there are chances that this issue will get resolve very soon.

Moreover, these all efforts are there so that this Window on ARM project will become community initiatives for newer versions of Windows. In addition, these newer version may be be supported on older Lumia and new Android devices as the OS now doesn’t support Android phones. However, the devices earlier uses Windows 10 ARM. But now, the tech developers are now in race to get more and more devices with latest Windows 11 ARM.