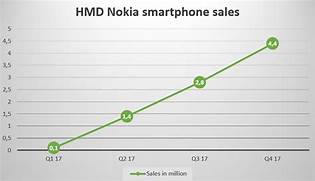 It’s amazing to know that Nokia’s comeback into the smartphone era has resulted extremely well. However, we all know that it’s really tough to compete where veterans like Samsung and Apple have already deepened their roots in the smartphone market. Moreover, it’s now all in open how well Nokia is performing, despite the tough competition. As per IDC reports, HMD Globals’ new Nokia is a matter of discussion. As it has made its good rank in the race with other well-established smartphone companies.

According to IDC reports about smartphone shipment, HMD Global has broken its record by giving year growth of more than 50 percent. Moreover, as compared to this, the other smartphone companies have recorded negative average growth. However, Xiaomi has saved itself, and it’s the only other company to have a yearly growth exceeding 50 percent. It’s really surprising to see Nokia performing extremely well in the market. Moreover, now Nokia ranks 8th in the race of top 10 smartphones list, leaving LG, Lenovo behind.

Moreover, Looking at the other sources, there is a complete calculation report showing how actually HMD Globals Nokia sells. However, in accordance with data, with 0.05 tolerance, Nokia sold about 20.8 million phones in Q3 2017. Looking at previous data, we have a record that in Q2 2017, Nokia sold about 14.4 million phones. In addition, 12.1 million phones were sold by Nokia in Q1 2017 in which there was 12 million feature phone and 0.1 million smartphones. However, it is unknown that how many smartphones were sold out of 21 million in Q3 2017. Moreover, HMD Global and Microsoft in collaboration sold about 35 million feature phones. It is really huge as it contributes to 8.9 percent of the market.