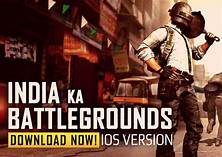 Battlegrounds Mobile India (BGMI) was available since June. And Krafton releases it officially on the Google Play Store on July 2. But, the game was available for early access download for Android users. Since then, the game was not available for download on iOS devices. However, after one month of wait, Krafton has now finally released the BGMI iOS app for iPhone users. The PUBG Mobile game is now currently available for download on the Apple App Store. The PUBG lovers can download the eSport title on their compatible iPhone running iOS 11.0 or later.

Moreover, the game is about 1.9GB in size. The players will have to download the resources packs and other updates following the installation. We advise that download the resources packs when your phone is connected to a stable strong WiFi connection. In addition, Krafton announces that some iOS users might not be able to log in due to ongoing maintenance. The official website mentions that the maintenance will end at 9:40 hours on August 18.

The BGMI iOS app came six weeks after the official release of PUBG on Android phones. BGMI recently crosses 50million downloads on the Google Play Store. Moreover, the developers also banned more than 3 lakh accounts in India for cheating. The company conducts permanent banning every day in a bid to ensure that BGMI remains a safe and fun gaming experience.