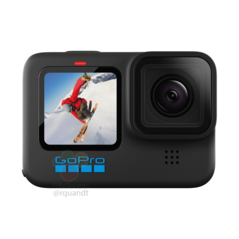 GoPro has unveiled the Hero 9 Black action camera in India last year. And, now the California-based American tech company is gearing up to launch its successor GoPro Hero 10 Black very soon. Moreover, the company is yet to announces the official details of its new action camera. However, some key specs and the design images of the new GoPro Hero 10 Black have leaked.

The company hints that they are going to launch its new GoPro Hero 10 Black. Ahead of the launch, the specs and images of this action camera have leaked online. The report reveals that the major upgrades are coming to Hero 10 Black. Probably there would be no changes on the outer aspect. The report states that the Hero 10 Black will continue to have two screens each at the front and the back.

The report says that the major upgrades are coming under the hood. The device will come with a new GP2 processor. Moreover, the new processor may bring a significant boost in performance that will support the refresh rate. The upcoming GoPro will bring support for a 5.3K video recording at 60fps, 4K recording at 120fps, and 2.7K recording at 240fps. In addition, the report states that the upcoming GoPro camera will offer a maximum photo resolution of 23MP, as compared to 20MP on the Hero 9 Black.

Furthermore, the device will also arrive with HyperSmooth 4.0 to offer ‘gimbal-like stabilization.; The camera will support automatic upload and will offer another way to upload new videos to the internet alongside the existing 1080p live-streaming. This GoPro Hero 10 Black includes other features such as 10 meters of water resistance, TimeWarp 3.0, support RAW photos, SuperPhoto, HDR, and many more. However, there are details on the pricing and availability of devices till now.