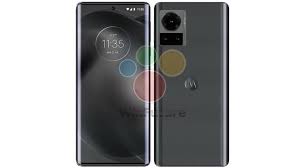 Motorola is now working on its next Flagship smartphone that may arrive shortly. However, there is no official naming of the device yet from the company. But, the device is now surfacing online with codename ‘Frontier’. The rumors suggest that the company may bring the device somewhere in second half of 2022. Moreover, now there is new leak revealing the design renders of the upcoming Frontier smartphone with the courtesy of Tipster Evan Blass. The report hints that the device would most probably be the among the premium smartphone line-up.

Motorola is working on the new smartphone series with unknown moniker at the moment. Moreover, there is design render of the upcoming Motorola Frontier smartphone revealing that the device will get curve display. In addition, the most characteristic features of this device will be that it will arrive with high resolution rear camera setup. As per the leak, the device will get 194MP rear sensor contradicting the earlier reports that suggest presence of 200MP sensor. However, there is details on other two sensors of the device. But, there is another leak revealing that the device will have 50MP Ultrawide lens and a 12MP telephone camera with 2x Zoom feature.

Moreover, according to new leak, the upcoming smartphone will get 6.67-inch AMOLED FHD+ display with 144Hz refresh rate and HDR10+ support. In addition, the device will arrive in various configuration. It includes 8GB+ 128GB/ 8GB+256 GB / 12GB+ 256GB.