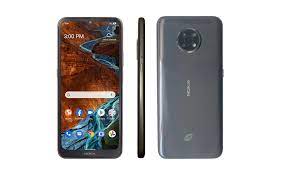 Nokia G300 5G will be the next affordable smartphone from Nokia licensee HMD Global following the launch of the Nokia G50. Moreover, a new leak claims to reveal the images and key specifications of the Nokia G300 5G. The smartphone may feature a Qualcomm Snapdragon 480 5G processor. In addition, some of the leaked details seem to match the Nokia G50 smartphone that also debuted with a Snapdragon 480 SoC. It also have a triple rear camera with a 16-megapixel main camera along with a 4,470mAh battery.

The device’s images and specifications were leaked by the website Nokiapoweruser. It claims that the Nokia smartphone will have a TFT display with a resolution of 720×1,600 pixels. And has a pixel density of 386 pixels per inch (ppi). The smartphone is said to run on Android 11. Moreover, it feature a Snapdragon 480 5G processor. Along with 64GB of internal storage expandable via a microSD card to 1TB. As per the leak, the Nokia G300 will sport a triple rear camera setup with a 16-megapixel main camera, a 5-megapixel ultra-wide camera, and a 2-megapixel depth sensor. For selfies, the smartphone is tipped to get an 8-megapixel selfie camera on the front. The handset is said to have a 1080p video recording resolution at 30fps.

Furthermore, the device may come with a Hearing Aid Compatible (HAC) rating of T3/M3. And offer connectivity features including GPS, Wi-Fi, 5G, LTE, and Bluetooth. Moreover, Nokia G300 5G smartphone will reportedly pack a 4,470mAh lithium-ion battery. In addition, it may offer up to 14.4 hours of talktime. And a standby time of 28 days and 11.5 hours. The smartphone is tipped to weigh 7.41 ounces (around 210 grams).