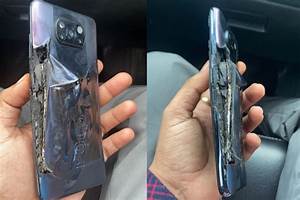 Poco X3 Pro is listed as one of the top-selling units from the brand. The phone packs several powerful features at a budget price, making it a best selling unit. However, the Poco X3 Pro is in the news now for the wrong reason. A Poco X3 Pro user has reported a complaint that this phone exploded just about five minutes after it was removed from the charger.

The Poco X3 Pro user Aman Bhardwaj shares his experience via Twitter when his phone blew up. He says that the Poco X3 Pro exploded just around five minutes after his phone was removed from the charger. His Twitter post includes several photos revealing the damages caused by the Poco X3 Pro blast.

Looking at these images, its evident that there was some several damage caused because of the Poco X3 Pro blast. Moreover, the images reveal the phone’s charred remains after the blast with the battery bulging out. This indicates the battery might have exploded after being fully charged. The intensity also seems quite high as the blanket where the phone was kept has also faced a burn. Furthermore, the user says that he bought the Poco X3 Pro just two months before on 15th June 2021 from a third-party retailer. At this moment, no injury were reported with the explosion. However, this is not the first time about explosion of Phones. There was also a heating issue with POCO phones and the company promises to fix the Poco F3 GT’s heating issue while gaming.

The Poco India responds to this incident. The company says, At POCO India, customer safety is of utmost importance and we take such matters extremely seriously. All our devices go through various levels of stringent quality tests to ensure that the quality of the device is not compromised at any level. Basis out technical investigations, the device appeared bent and the LCM (Liquid Crystal Module) were in a crushed condition which indicates application of external force. This is thus classified under ‘Customer induced damage’ says a Poco spokesperson.