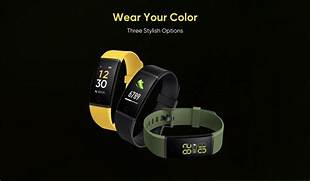 Realme is all set to launch Realme Band 2 and the launch date in India is set for October. The Tipster Yogesh Brar shares an official poster of the upcoming Realme fitness tracker which recently passed BIS certifications. Moreover, the poster reveals the Realme Band 2 strap color options. Looking at the poster, it seems that the straps will be available in three hues i.e black, green, and blue. However, the black and green straps look to be of silicon material, whereas the blue one may be of leather material. Considering that, all three straps will have a tang buckle very similar to the Original Realme Band. In addition, the poster came from China, so the tipster Yogesh is pretty sure that the Realme Band 2 will come in India as well.

The Realme Band 2 will feature a 1.4-inch square display which is said to be bigger than its predecessor. Moreover, the display will be more squarish form with heart rate and SpO2 sensor at the back panel. The fitness band will measure 45.9* 24.6* 12.1mm with replaceable straps. In addition, the band 2 design may be headlined by pogo-pins allowing to charge the device without the need of removing the straps. Furthermore, the Realme Band 2 will not have a button. Thus, we may speculate that the tracker may have a touchscreen panel. This is all about Realme Band 2 at the moment. However, we may expect more leaks before the launch in India giving complete offerings of Realme Band 2.