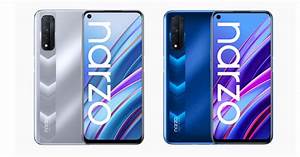 Realme Narzo 50A launch may be imminent as it passes the BIS and NTBC certifications. According to Tipster Mukul Sharma, the Realme Narzo 50A will be available in Oxygen Green and Oxygen Blue color variants.

According to the reports, the Narzo 50A may offer a 12.5MP primary rear camera with 4080*3072 resolution and f/1.8 aperture. In addition, the front camera may have an 8MP sensor with 3264*2448 resolution. There are chances that the device may come with additional two rear cameras, but it’s still a mystery. Moreover, the launch dates are still not yet out. But, we expect it to be very soon. The Realme Narzo 50A is expected to arrive with a price tag under Rs.10,000.