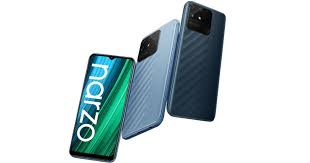 Realme after bringing Realme Narzo 50 series in India, now the company is all set to launch one more devices in this series. The previous Narzo series devices includes the Narzo 50A and the Narzo 50i. And now the company is gearing to announce the Realme Narzo 50A Prime. Moreover, the Tipster Mukul Sharma found the upcoming device listed on Realme India website. However, the listing doesn’t reveal much details. But, it hints that device may launch imminently. In addition, the report from 91Mobiles also states that the device was on the EEC certification website back in November 2021.

Realme soon going to bring the Realme Narzo 50A Prime as it appears on the company India website. However, there is no official confirmation from the company about the launch and details. But, the company may announce the device in January or February 2022. The device may share specifications with the previous Narzo 50A. Considering that, the device may sport IPS LCD, big battery, or triple rear camera setup.