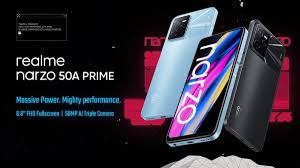 Realme is working to bring its next Narzo device Realme Narzo 50A Prime in India. The company is planning to host two events next week and schedules to launch the device on April 25. Moreover, the company also confirms to launch the Realme GT Neo 3 on the April 29 launch event. Other than this, the company has also Realme Pad Mini and Realme GT 2 line-up for launch in India. However, the launch dates for these devices are still underwraps. Additionally, the upcoming Realme Narzo 50A Prime is now on the Amazon listing suggesting its details. The device will be exclusively available on Amazon India. Since, the device is already available in Indonesia, the details about the device is all over the internet.

The company is all set to launch the Realme Narzo 50A Prime on April 25 in India. Moreover, the company schedules the launch at 12:30PM IST. The users may live stream the launch on Company’s official YouTube and will get live updates on Realme India social media handle. The company announces the launch details via its twitter handle.

Talking about specifications, the device will arrive with a 6.6-inch FHD+ IPS LCD display with 1080× 2408 pixel resolution. In addition, the device will have 20:9 aspect ratio, 180Hz touch sampling rate and 600nits peak brightness alongwith 60Hz refresh rate. The device will get power from an Octa-core UniSoC T612 processor with clock speed up to 1.82GHz. Furthermore, the device sports triple rear camera setup with 50MP primary camera.