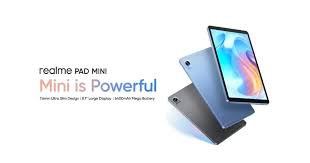 The company is soon going to launch the Realme Pad Mini in India. Moreover, the device is now on company’s India website. There is a page on Realme India website showing the option for the Pad Mini. In addition, the website shows that the device will have both WiFi and LTE options arriving in India. As the device is trimmed version of the earlier Realme Pad, thus it may have lower price list as compared to Realme Pad. To recall, the Realme Pad arrives in India at price range for 3GB RAM and 32GB internal storage at Rs 13,999. Furthermore, the LTE variant in 3GB/ 32GB + 4GB/ 64 GB is available at Rs 15,999 and Rs 17,999 respectively. Considering these prices, we may assume that the Realme Pad Mini will have lower budget than this.

Talking about specifications, the Realme Pad Mini will feature 8.7-inch LCD HD display with 1340×800 pixels. In addition, the device will get power from an UniSoC T616 processor with 4GB RAM. And, the device will get storage configuration up to 1TB via microSD card slot.