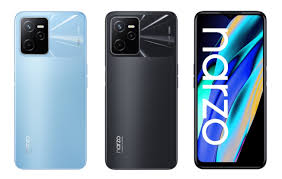 Realme is giant smartphone vendor working consistently to bring the devices one after another raising the bars. After launching the latest device Realme 50A Prime in Indonesia, the company now confirms to bring it in Indian market. Moreover, the company reveals that the Indian box won’t offer charging adapter with the device. Thus, this Realme Narzo 50A Prime will become first device from to company to arrive without charger in India. In addition, the reliable Tipster Guglani shares that the upcoming device will arrive in India on 30th April.

The upcoming Realme Narzo 50A Prime will now arrive in Indian market on April 30. Moreover, there are details of the device surfacing online with courtesy of Tipster Guglani. The Tipster reveals that the device will arrive in the country with two variants and two color options. However, we may expect this to be similar as that of two variants in Indonesia. This includes 4GB RAM+ 64GB internal storage and 4GB+ 128GB internal storage configuration. Additionally, the device available in Indonesia also have two colour options Flash black and Flash Blue.