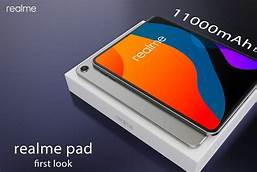 Realme is going to launch its first-ever tablet Realme Pad in quite some time. But there is no launch date yet. Reports suggest that the company may launch the Realme Pad before the end of this year. However, there are various leaks regarding the details of design and color options. Now, in the tweet, Realme India and Europe CMO, Francis Wong indirectly confirms that the Realme tablet will have an AMOLED display with a bigger size. But, the company has given no official clue regarding this new tablet.

Realme Pad to feature an AMOLED display with bigger screen

Ahead of the Realme GT and GT Master Edition launch in India yesterday, the Realme executive asks the fan which color of the GT Master Edition phone would they pick, the Voyage Grey or Racing Yellow. In response to that Twitter post, the user says none as the 6.43-inch display wasn’t sufficient for him. The Realme Executive then replies that if users wish to have a bigger AMOLED display, they should wait for the Realme tablet. Other than this, the top executive has not revealed much else about the tablet.

The leaks suggest that the Realme Pad may feature a 10.4-inch display with slim bezels and 6.8mm thickness. Moreover, the tablet may come with a stylus pen slot and a 7100 mAh battery with microSD slots. The tablet may run Android 11-based Realme UI2.0 custom skin. In addition, the tablet will have an aluminum unibody design and will come in Grey and Gold color options. Furthermore, the tablet will feature speaker grills, a USB Type-C port, 8MP back and front camera. However, the launch dates are not officially confirmed yet. But, it is likely to have around October 2021.