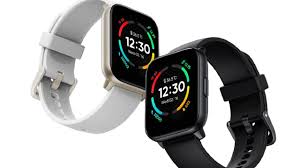 Realme is now widespread brand with multiple devices under its shade. Apart from Smartphones, the company has also tight grip on smartwatches, smartTV and more markets. Moreover, the company up till now has launched six smartwatches. And now in the recent development, the company is going to launch new smartwatch Realme Watch SZ100. In addition, the report from Industry sources reveals tha launch timeline of the device in India. Alongwith this, the report suggest the color options of the upcoming device.

The company is soon going to bring the upcoming Realme Watch SZ100 most probably in May in India. However, the exact launch dates are still under wraps. Moreover, the device will be available in two colours including Magic Grey and Lake Blue. In addition, the details and specifications of the device is still not out yet. As per the moniker, the upcoming device seems to be a member of S series smartwatch.

Moreover, the company is planning to bring the upcoming Watch SZ100 very soon after launching the Realme Watch S100. In addition, the other device from the company will also arrive in India soon. This device appears on multiple certification websites hinting at its imminent launch. Other than this, there is no details regarding the device details.