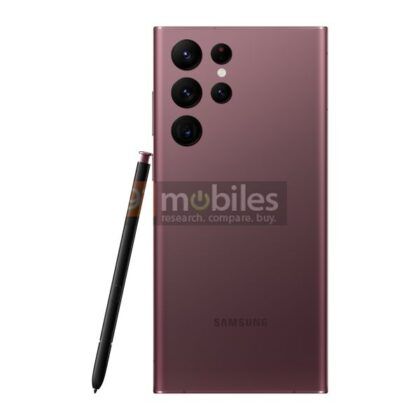 Samsung is prepping up to bring the premium smartphone series under moniker Samsung Galaxy S22 series. The series is most awaited smartphone of this year and the company will announce as the new year arrives. Moreover, on the last day of the 2021, there is new report from the Evan Blass suggesting the latest renders of the device. The upcoming Samsung Galaxy S22 Ultra was previously on the Geekbench and multiple other certification websites hinting at its offerings and details. In the latest report from the tipster Evan Blass, the new Flagship smartphone will have the S pen support, quad rear camera and edge to edge display. Additionally, there is 91Mobiles report revealing the results and color of the Galaxy S22.

Samsung Galaxy S22 Ultra is soon going to arrive in the start of the upcoming year. There are reports from 91Mobiles suggesting that the device will arrive in four color options. It includes Burgundy, Green, Phantom Black and Phantom White color options. Moreover, there are images of the upcoming device from the publication which is same as that of the Evan Blass leak. The device will have a support of S Pen same as that of the Samsung galaxy S21 Ultra. The device will have inbuilt slot for the S Pen to handle it separately. In addition, the smartphone will feature metal frame. Furthermore, the images shows that the front panel will have centre hole punch cutout, edgy display alongwith quad rear camera setup.