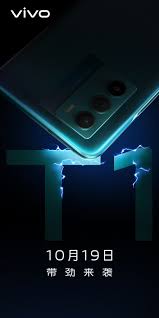 Vivo is setting itself firmly in the smartphone market globally by the launching its device back to back. Now the company is gearing up to bring its new T series smartphone under the moniker Vivo T1 and Vivo T1x. The company will first launch its upcoming T series smartphone in China on October 19. Moreover, the company officially confirms the exact launch of these upcoming Vivo smartphones. The Digital Chat station reveals the leak by saying that both these devices will mark its position with higher refresh rate, Snapdragon 778G SoC or Dimensity 900 chipset. In addition, they both will house 5000mAh battery.

The company recently teases the teaser of the smartphones on official account Weibo. The teaser reveals that the device will have a triple camera housing at the rear panel. Moreover, the Digital Chat station further reveals that out of these two one will have a waterdrop notch display and dual rear camera setup. Whereas, the other one will have a punch-hole display and triple camera at the rear side. In addition, the tipster also claims that high refresh rate LCD display, Snapdragon 778G / Dimensity 900 SoC. Along with a 64MP primary camera and a 5000mAh battery.

Moreover, recently the new Vivo smartphone was on the TENAA and 3C with model number of. The report says that this smartphone on listing is the upcoming Vivo T1. Considering the the TENAA listing, the device will arrive with 6.58 inch FHD+ display and 50MP dual camera rear setup with front 8MP sensor. In addition, the device may arrive with pack of 8GB/12GB RAM with 128GB/256GB of internal storage.