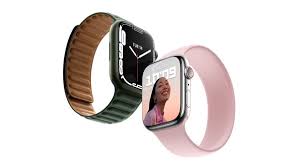 Apple recently unveils the Apple watch Series 7 recently that was same as it’s predecessor with different display size from 41mm to 45mm. Moreover, the device’s design is not at all boxy as it was predicted by various tipster. Now, the tipsters are claiming that those boxy design may be of the upcoming watch series 8. But, its not official so it may be wrong also. In the latest development, there is a fresh leaks from the LeaksApplePro via PhoneArena giving the design and CAD. The report suggest that Apple may be recycling the old designs for the upcoming Apple watch series 8, but will have different speaker grille. In addition, the speaker grille is now in two parts, both on the top of each other.

However, these are just a speculations and renders, so it’s better to wait for the official confirmation before any conclusions. However, there may possibility that the company may stick on the rounded edges for another year. According to insider Young Ross, the display may be much larger display in the upcoming year. He also suggest that the company may also have three different Apple watch models.

Furthermore, the company may bring new features such as body temperature scanner, fertility scanner, and improvements to ECG and sleep tracking sensors. Lastly, there is report suggesting that the company is working on blood glucose monitor. This would enable fast Blood sugar test for diabetic patients.