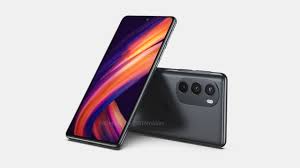 The report suggest that the upcoming Motorola Austin could be under the mid-range affordable smartphone line-up as speculated by design renders. The design renders via the industry sources suggest that the device will have a centre-position punch hole cutout with selfie snapper with a sizeable bezel under screen. Moreover, the device will have volume rocker and fingerprint scanner at the right side. As per the image, the rear panel will have rectangular module housing triple camera setup with LED flash. There is numbers on the camera showing that it will have a 50MP camera sensor. In addition, the Moto logo will also be on the back side.

This is all details about the device. Other than this there is nothing known so far. Moreover, talking about the Moto Edge 30, the device renders shows its gradient blue color options. However, this device was also spotted in Black color options. In addition, the design renders suggest that the front panel will have slim bezels and hole punch cutout housing selfie camera. The device may feature 6.6inch OLED display with HDR10+ and 144Hz refresh rate. Furthermore, it will have processor which is accompanied with up to 12GB LPDDR5x RAM and 256GB UFS 3.1storage.