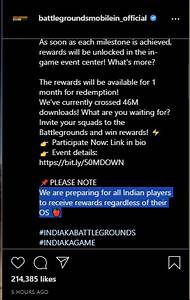 After Battlegrounds Mobile India (BGMI) came for android Users, there was excitement all around. But, the iPhone users were feeling left out. But, there is good news for Apple users that they may also get to play BGMI on their iPhones and iPad. Moreover, there is a rumor about Battlegrounds Mobile India that is coming to iOS very soon. However, to this matter, Krafton is not saying a word, and for now, it’s like a mystery adding to more confusion.

However, there is hope for iOS users that, BGMI could land on their iOS devices soon. Moreover, this hope is supported by the Instagram page of games with a very subtle teaser. This teaser states that there is an iOS version soon in the works. The text reads that we are preparing for all Indian players to receive rewards regardless of their OS. In addition, the text ends with an Apple emoji, which clearly means that the company is pointing towards iOS users also. However, there is no official information about it.

Now that Battlegrounds Mobile India crosses a certain number of downloads and sets up its core player base in the Android market. Thus, introducing this app on iOS should not be a problem. The krafton also sets milestone rewards after every milestone they cross. There are three milestones that players need to hit, 48 million downloads. And then 49 million, and finally 50 million downloads. The rewards after achieving these milestones are three supply coupon crate scraps, three classic coupon crate scraps, and a permanent Galaxy Messenger Set, respectively.