Chinese company OEM known for its top class smartphone market globally and now restricts itself in its own country market. The brand is now all set to introduce its budget smartphone Huawei Enjoy 20e. Moreover, there are reports suggesting that the Enjoy 20e is going to be the next smartphone with Huawei logo on it.

There is official confirmation on the upcoming Huawei Enjoy 20e on the company’s official website. Moreover, the website reveals that the smartphone will feature big battery capacity of 5000mAh battery. But the charging support is unknown. In addition, the display has a 6.3- inch HD LCD screen with U shaped notch. The rear camera has a dual camera setup with an LED flash. 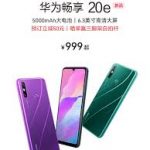