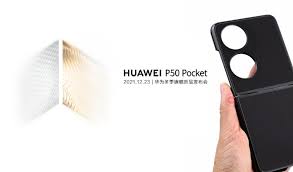 Huawei is now all set to bring its foldable smartphone that shows the feature of fliping instead of folding. The company now officially teases the launch date of the upcoming Huawei P50 pocket friendly on its official Twitter account revealing the launch date. Moreover, the teaser post reveals only the launch details, and not the other details. As per the teaser image, the device will show that it flips, thus it has Pocket in its name. This hints that the company will make flippable device rather than foldable one.

The company is going to launch the P50 Pocket foldable smartphone on 23 December at ,8:30AM CET (1PM IST). However, there are not much details about the device till now. But, looking at the image, it is very clear that thr company will want to overtake the currently available Samsung Galaxy Z Flip3.

Considering that the device will be like the Samsung Galaxy Z Flip3, we may expect that the device may also atleast have Snapdragon 888 processor. Along with AMOLED display and 120Hz refresh rate. Moreover, there may be chances thar that company inorder to overtake the 1080p of the Z Flip3. They will bring the P50 Pocket with higher resolution. In addition, there are also reports that the device will get Android support from the Harmony OS which is company’s own production.