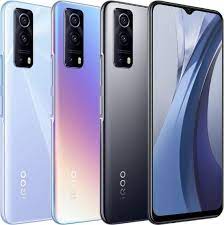 The iQOO Z5 is the latest smartphone from the Vivo sub-brand, iQOO. After launching in China last week, the phone was announced in India a few days ago. New info has revealed that the manufacturer will launch a pro version of the phone.

This is a bit of a surprise as the iQOO Z series hasn’t had a pro model since its debut in May 2020. Even the iQOO Z3 didn’t get an x-model like its predecessor, the iQOO Z1. Although, it has been reported that there will be an iQOO Z5x. As a matter of fact, a listing for the phone has appeared on the Chinese retail website, Jingdong.

The news about the iQOO Z5 Pro comes from the Chinese leaker that goes by @Arsenal on Weibo. Save for mentioning that the iQOO Z5 will have a pro version, the leaker didn’t reveal any more details about the smartphone. Moreover, The iQOO Z5 Pro will surely pack significant upgrades when compared to the iQOO Z5. So we should see a more powerful chipset inside it such as the Snapdragon 870 chipset or the Dimensity 1100 or Dimensity 1200. In addition, we can also expect upgrades in the camera department. And maybe even an AMOLED display and support for a much faster charging technology than the 44W the iQOO Z5 offers.

The iQOO Z5 has a 6.67-inch FHD+ LCD display with a 120Hz refresh rate. It gets power from the Snapdragon 778G and is available with up to 12GB of RAM and 256GB of storage. There is a 64MP main sensor on the back of the phone along with an 8MP ultrawide angle camera, and a 2MP depth sensor. For selfies and video calls, it has a 16MP camera in front. The phone has its fingerprint scanner on the side and packs a 5000mAh battery.