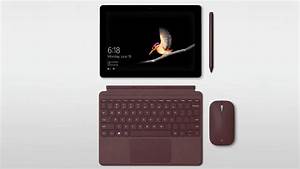 Microsoft is prepping to launch a bunch of its new hardware products on September 22. The company will launch new Surface devices such as the Surface Book 4, Surface Book 2, and the Surface Go 3. It is said the Microsoft Surface 3 will have features the same as that of its predecessor. But, it may launch with a new chip. Moreover, the recent leaks on the specifications of Surface Go 3 suggest that it will come with Intel Core i3 Chip. In addition, it will have 8GB RAM, a 10.7-inch FHD display, and more. The device also appears on the Geekbench revealing some of the key features.

According to reports, the Microsoft Surface Go 3 will continue to use Intel chips and will come in different variants. These include an Intel Pentium Gold 6500Y processor coupled with 4GB RAM. And the second one will be an Intel Core i3-10100Y model with 8GB RAM. Moreover, according to the Geekbench listing, the Intel Pentium Gold 6500Y shows a 62% higher performance than Surface Go 2’s Pentium Gold 4425Y. The new i3-10100Y belongs to the Amber Lake Y series. In addition, it also reveals that the device will run on Windows 10 Pro operating system. The report further reveals that the Surface Go 3 does not have any fans and no moving internal components.

The 2-in-1 tablet device will come in a 10.5-inch display with Full HD resolution. Moreover, the company is still sticking on its old design where the PC is encased inside magnesium alloy with a fold-out stand. Talking about pricing, currently there are no details. But we expect that company will spill out details before the September 22 launch event.