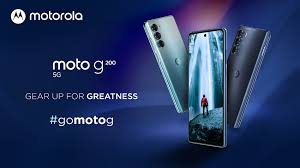 Motorola after launching the Motorola few devices such as Moto G51, Moto G41, Moto G71, Moto G31, and the Moto G200, the company is now prepping up to launch these devices in India. Moreover, the tipster claims that the upcoming Moto G200 will also arrive in the country. The new leak from the Tipster Debayan Roy states that the new Motorola device with Snapdragon 888+ will arrive in India soon. Earlier, the tipster claims that the device may be the Moto G200 arriving in India on November 30. Afterwards, the tipster gave another report that there may be delay in the launch of Moto G200. This hints that the device will not appear on November 30.

Moreover, the tipster also claims that the Moto G200 arrive in India in the early December. However, there is confusion whether the smartphone will have the G200 moniker or the Edge branding. Talking about the specifications, the upcoming Moto G200 will feature 6.8inch LCD FHD+ offering a 144Hz refresh rate. The device will get pre-installed Android 11 OS. Furthermore, the device will get power from the Snapdragon 888+ chipset with 8GB LPDDR5 RAM with 128GB/256GB UFS 3.1 storage configuration. As far as camera details are concern, the device will have a 108MP primary camera with 8MP ultra wide and the 2MP depth sensor. In addition, the device front camera will be of 16MP sensor. The device is said to be available in the price range of €449 which is around Rs 37,650 in India.