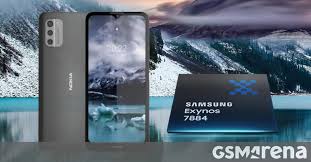 Nokia smartphone with codename Suzume appears on the Geekbench listing

The company is working on the arrival of the new Nokia smartphone, and among those devices, one of the variant will be Suzume. Moreover, the device Suzume appears on the Geekbench 5 where it scores 306 points in single core test and 1000 in the multi core test in the Geekbench test. According the listing, the device will have an Octa-core Exynos processor that will arrive with codename Universal7448B. Moreover, this same Processor was present on the other companies devices such as Samsung Galaxy A10, A10e and many more.

Moreover, the listing suggest the upcoming device with Suzume codename will have preloaded latest version of Android 12 out of the box. In addition, the device on the listing was of 3GB RAM, however, the other variants may have higher RAM configuration. This is all we get from the Geekbench listing from the Geekbench certification listing. We may expect the company to arrive on other certification websites soon. And thus, the company may also reveal other details and launch dates in coming time.