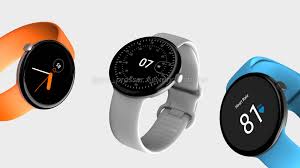 Google is prepping up to bring its pixel watches as there were rumors that the device will bring premium smartwatch at Pixel 6 launch in US. Moreover, the company didn’t brought the wearables at the launch event back then. But, now there is reports that the Google pixel smartwatch will soon arrive. However, there is no official confirmation from the company till now regarding the device. In addition, the tipster Jon Prosser reveals the expected launch date of the upcoming premium Pixel smartwatch. Earlier, there were design renders of this upcoming Google Pixel watches hinting at its imminent launch.

The company is planning to launch the premium Google Pixel from past few months.But, it seems that now the company will finally succeed in its plans. There is new report from Jon Prosser suggesting that the device may arrive on May 26 i.e H1 of 2022. In addition, the tipster adds disclaimer that says Google may postpone the launch date in future. However, there is no official confirmation from the company regarding this yet. Earlier, the tipster revealed the first look of the pixel premium smartwatch along with marketing images. Thus, these leaked images suggest that the device will be the premium smartwatch. Furthermore, the device will have a bezel-less display with round screen. Lastly, the device has the codename Rohan.

Moreover, the report suggest that the watch may arrive two color options such as Black and silver. In addition, the company may also release 20 different varieties smartwatch straps for this pixel watch.