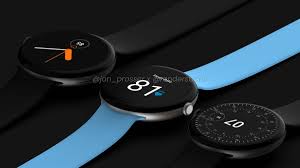 Pixel is working to bring its first smartwatch i.e Google Pixel Watch which has been in rumors from long time. The company may now debut the device in early 2022. Moreover, as per the reports, the device has the code name Rohan which may get the latest version of the Wear OS. However, the Pixel fans and tech junkies are excited to see the latest Pixel smartwatch after the Pixel 6 Pro launch. In addition, in the latest development, the YouTuber John Prossor shares some leaks regarding the upcoming Google Pixel Watch. The leaks reveals the key details and specifications of the upcoming device and image is said to be the marketing images not the CAD renders.

The company now seems all set to launch the most rumoured smartphone Google Pixel smartwatch in early next year. Moreover, There are fresh leaks of the device along with some images. As per the image, the device will arrive under Moniker Google Pixel watch. In addition, the upcoming watch will have round design with very less bezels. Moreover, the company has designed the crown on the right side of the device. Whereas, the bottom side will have the microphone.

Moreover, one image reveals the presence of UI for heart rate hinting that the device may be working on Fitbit integration under codename Nightlight. In addition, the other image shows the presence of Google Map hinting that the users may use the feature for navigation in their watch itself. As per the images, the smartwatch will allow the users to make calls alongwith other features.