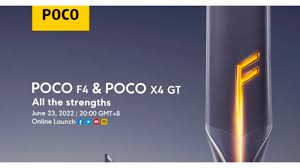 Poco is all set to launch set of smartphones in upcoming week in global as well as Indian market. Moreover, the company schedules to launch the upcoming Poco X4 GT will arrive in Global market on June 23. In addition, the device will arrive globally along with Poco F4 5G on the same day. The company also sets to launch the Poco F4 in India on the same day I.e June 23. However, the India launch date for X4 GT is under wraps at the moment. Furthermore, the company shares the launch teaser of the upcoming X4 GT revealing the look of the device.

Moreover, the report states that the device is rebranded version of the earlier launch Redmi Note 11T Pro. In addition, earlier the device was on NBTC certification website with model number 22041216G. The device gets 6.6-inch FHD+ LCD display with 120 Hz refresh rate and 650 nits brightness. Furthermore, the device will get power from an Octa-core MediaTek Dimensity 8100 processor with Mali G610 GPU.