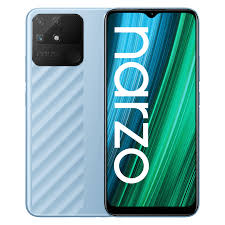 Realme will soon bring the upcoming Narzo series Smartphone under moniker Realme Narzo 50. However, the official launch date is still underwraps. But, the latest report with the courtesy of Yogesh Brar suggest that the device will arrive in first half of March. In addition, the report cites that the device will be available on Amazon for sale which is new this time, as all Realme devices appears on Flipkart at first. As per the report, the device listing was available on Amazon India, but later it was taken down. Thus, this hints that the device arrival is around the corner and may arrive soon.

Moreover, the upcoming Realme Narzo 50 will house 4880mAh battery with 33W fast charging support which will be one step ahead of the Realme Narzo 50A. Talking about details of Realme 50A, the device gets 6.5-inch HD+ display with MediaTek Helio G85 SoC. In addition, the device arrives with 4GB RAM with 50MP rear camera and 8MP Front selfie camera sensor.