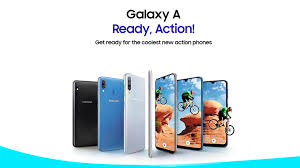 Samsung is gearing up to bring A series smartphone from a month. These include Samsung Galaxy A53 5G and the Samsung Galaxy A73 5G. Moreover, these smartphones are under buzz from past few weeks as these devices are already surfacing online. In addition, the key details of the device are already airing all over as these were on several certification websites. Now, in the recent development there is a new report from Evan Blass that there is poster of upcoming Samsung’s launch event. As per the poster, the company is scheduling the launch event on March 17. Furthermore, the poster hints the launch of A series Smartphone as there were A alphabets all over the poster in 7 different styles.

The company is soon going to introduce the sets of A series smartphone. Moreover, there is poster revealed online showing that the company is helding a launch event on March 17. Looking at the poster, it is clear that the Samsung Galaxy A series smartphones are going to dominate the event as there is A Alphabets all over the poster. In addition, there is possibility that the seven different styles of alphabet denotes seven different devices.

However, this is mere speculations and there is no official confirmation regarding the sets of devices arriving on event. But, we may expect that the company will bring the Samsung Galaxy A73 5G and Galaxy A53 5G in this launch event. Considering the history, the company brought two devices on the same day last year. These Samsung Galaxy A72 and Galaxy A52 5G the predecessors of upcoming devices.