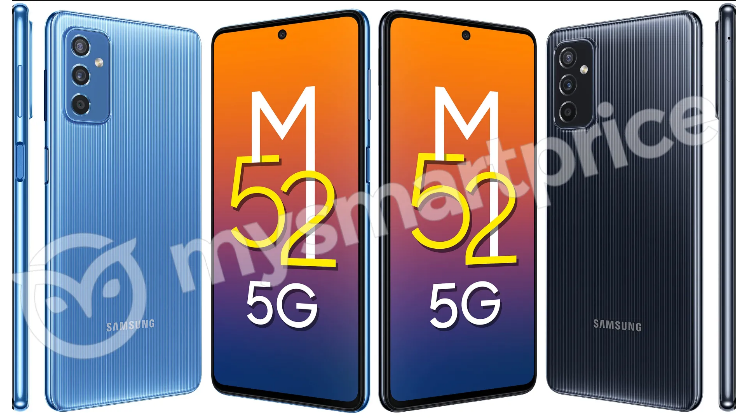 Samsung has been launching quite a few budgets and mid-range 5G smartphones in India. Recently, the company brought Galaxy A22 5G and Galaxy A52s 5G. And now, it’s prepping up to launch the new Samsung Galaxy M52 5G in India. Moreover, the company plans to launch the smartphone very soon. However, the official launch dates are still not out. The latest development on this device is that Tipster Ishan Agarwal shares design render images of Galaxy M52 5G. These renders gave us an idea about the specifications and offerings this new smartphone has to bring.

Samsung is gearing to launch Galaxy M52 5G very soon. Ahead of the launch, the design render images leak out hinting at its design details and key features. Tipster Ishan Agarwal shares the render images to the MySmartPrice.

According to the images, the Galaxy M52 5G will have a hole-punch display at the front. Moreover, the screen is flat and is likely to be an AMOLED panel. In addition, the report states that the device will have a 120Hz refresh rate panel. The bezels around the display are quite thin, except for the chin. Furthermore, the device’s rear panel has a vertical texture line with a polycarbonate shell. The upcoming Samsung upcoming 5G smartphone will come with a triple-camera setup at the back panel. Moreover, the LED Flash will also house inside the rectangular-shaped camera module. The power-cum-fingerprint scanner will be on the right edge. Additionally, on the right above there is the volume rocker and on the left edge is the SIM tray. The rendered image reveals that the phone measures 7*76*164mm and weighs 175grams.

According to previous leaks, the device is said to feature a 6.7-inch Full HD+ Super AMOLED display with a 1080*2400 resolution. The display will have a layer of Gorilla Glass 5 on top. Moreover, the handset will pack a Qualcomm Snapdragon 778G Chipset with RAM up to 8GB and 128GB storage configuration. In addition, the user may expand the storage up to 1TB via a microSD card. Talking about camera specs, the triple-camera array will have a 64MP primary camera with a 12MP ultrawide sensor and a 5MP depth camera. It will offer a 32MP selfie camera. In addition, the device will run on Android 11- based One UI 3.1 out of the box. The device will come with Samsung Knox 3.7 security patch.