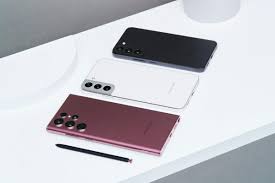 Samsung recently introduced the Samsung Galaxy S22 series that was the premium lineup smartphones from the company. Moreover, now, the company is outlimiting the performance of its latest Samsung Galaxy S22 series. In this, the company limits over 1000 apps performances that were in the Game optimising service list (GOS). In addition, as the apps were under GOS for system performance optimization and overcome thermal issues. Thus, there was result that this application didn’t allowed these apps to utilise processor performance completely. Moreover, the apps that were in the GOS list are LinkedIn, Snapchat, Microsoft office and few games. In addition, the Geekbench certification website decide to remove the Samsung galaxy S22 series alongwith some other old smartphones from Android benchmark list on Geekbench website.

The Geekbench certification website delisted the latest Samsung Galaxy S22 series from the Geekbench Android chart list as it’s apps get limits in the performance as it enters the GOS list. Moreover, the GOS decides to lower the performance of apps using application identifiers and not hamper the application behaviour. In addition, the Geekbench as per the internal testing, decides that other devices like Samsung Galaxy S21 series, Galaxy S20 series and Galaxy S10 series alongwith S22 series will be in the GOS list. Thus, these smartphones will also remove from the Android Benchmark chart in Geekbench website.

Furthermore, the Samsung in the answer of getting delisted states that about the GOS in the latest Galaxy S22 series. The company states that the GOS is there to control the excessive heat in gameplay. In addition, the company also states that they are going to software update to overcome the chipset performance.