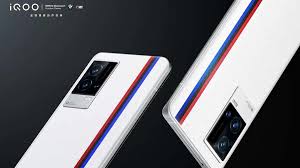 iQOO is gearing up to launch the iQOO 9 series on January 5 in China. Moreover, the company recently reveals the phone rear design hinting that it has different from the current device iQOO 8 series. In addition, there are multiple reports surfacing online suggesting the key details and specifications of the upcoming iQOO 9 series. In the recent development, the company shares more photos of the upcoming iQOO 9 series. These images focuses on the front panel of the device revealing its design and offerings.

The company reveals the front panel of the upcoming iQOO 9 series via official images. Moreover, the images reveals that device will get punch hole display with thin bezels around the corners. The device will house selfie camera sensor in the centrally positioned hole punch cutout. In addition, the side design is also clearly visible in the leaked image showing that the device is slimmest. As per the image, the device’s right side will have the volume button and the power button.

Moreover, the back image of the device reveals clearly that the company is having a sponsored gaming tournament. The back panel shows large camera module consisting three camera lenses. However, the poster images doesn’t gave any clue about the camera details. But, there are reports confirming that the primary camera will have OIS technology. Other than this, the device will have BMW vertical strip alongwith iQOO branding.