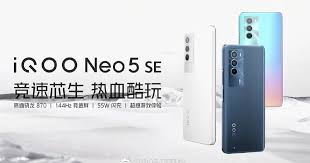 iQOO sub brand of the giant tech company Vivo is gearing up to bring the upcoming iQOO Neo 5 series. This upcoming mid-range affordable smartphone is surfacing online from past few weeks. Moreover, the company will bring the series first in China on December 20 that includes iQOO Neo 5s and iQOO Neo 5 SE. In addition, there are many reports suggesting the specifications and offerings. Now, the latest teaser arrives that confirms all the details of these upcoming iQOO Neo 5 SE.

The company schedules to bring the iQOO Neo 5 SE along with the vanilla iQOO Neo 5s model. The company confirms the device’s details via official teaser poster. Moreover, thus official poster reveals that the upcoming Neo 5 SE will get power from the Snapdragon 870 SoC. Whereas, the Neo 5s will get power from the Snapdragon 888 SoC. In addition, the upcoming SE model will have the AMOLED display with 144Hz refresh rate. However, the display and panel details are still under wraps.