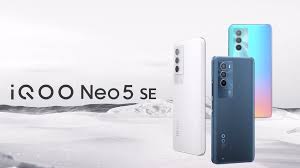 iQOO is now gearing the launch of upcoming iQOO Neo 5s on December 20th in China. In addition, the company confirms the launch date few days back on its official Weibo account. In the recent development, the company now officially reveals that they are also bringing iQOO Neo 5 SE on the same day i.e on 20 December. Other than launch dates, there is teaser release by the company revealing the Colour variants of the upcoming Neo5 SE. Moreover, talking about the teaser video, the upcoming iQOO Neo 5 SE will arrive in the White, Dark Blue, and Blue gradient color options. In addition, the teaser also suggest that the Neo 5 SE will come with punch hole display and a 50MP triple camera rear setup. The video reveals that the right side of the device will have the power and volume keys. Whereas, the bottom side will have the USB TYPE-C port and speaker grille.

There are many reports and rumors suggesting the specifications of the iQOO Neo 5 SE. As per the leaks, the device will feature Snapdragon 778G processor alongwith 6GB/ 8GBRAM options and 128GB internal storage configuration. Moreover, the device will also have AMOLED or LCD display and also says to have 66W fast charging support. According to the teaser video, the device will feature triple rear camera setup involving 50MP primary camera. However, there are many specifications which are still under wraps including display size, battery details, and many more. In addition, there is no details on pricing of the upcoming device.