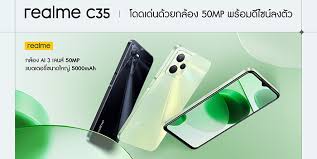 Realme is gearing up to bring the upcoming entry level C series smartphone the Realme C35 in multiple markets. Moreover, the Realme Thailand already confirms the arrival of the device. The device was also on the Eurasian Economic Commission (EEC), BIS, and Indonesia SDPPI listing earlier revealing the device with model number RMX3511. Now, in the recent leak, the Upcoming Realme C35 is said to arrive on 10th February in Thailand revealing the key details.

The company is heading towards the launch of the upcoming Realme C35 in the country. However, there is no official launch dates yet. Ahead of the launch there are multiple reports and rumors suggesting the key details of the device. Moreover, the rumours suggest that the device will include 6.6-inch FHD+ display with 720×1560ppi resolution. And the TUV Rheinland reveals the presence of blue light eye colour protection. In addition, the device will have bezel-less display and water drop notch housing front camera. Furthermore, the device will house 6000mAh big non- removable battery with fast charging support and Li- Polymer battery family. Lastly, the device will get power from the Octa-core MediaTek Helio G80 including 2GHz cortex A75 + Hexa Core, and 1.8GHz cortex A55.