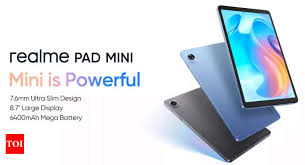 The company is hosting two launch events this month where they are planning to introduce series of Devices. Moreover, the Realme Pad Mini and Realme Buds Q2 are going to hit Indian market on April 29 at 12:30 PM. The launch even will be live on YouTube and live updates will be on social media handle. In addition, the devices may be available for sale soon in May. The upcoming devices will be available on Flipkart and Realme.com.

Talking about specifications, the Realme Pad will feature an 8.7-inch LCD display with 1340×800 pixel resolution. In addition, the device will get power from UniSoC T616 processor with 4GB RAM and up to 64GB internal storage configuration. The device will further have microSD support up to 1TB. Furthermore, the upcoming Android tablet houses 6400mAh battery with 18W fast charging support.