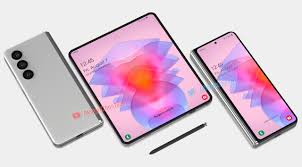 Samsung after successful launch of Galaxy Z Fold 3, the company is working to bring the upcoming Galaxy Z Fold 4. Moreover, the company may bring the device this year itself. However, the launch dates are still underwraps. The company utters no word regards the details of the upcoming Fold device. But, the device is already surfacing online from past few weeks. In addition, there are rumors suggesting that the device may get telephoto camera similar to Galaxy S22 and S22 plus. And now, in the recent development, there is new details about the device focussing on its camera sensors. The tipster Dohyun Kim reveals on his Twitter handle that the upcoming Samsung Galaxy Z Fold 4 may have 108MP primary camera. Thus, it suggest that the device will get the highest capacity sensors in Foldable smartphone till date.

The company is bringing new technologies and features with its upcoming next Foldable device Samsung Galaxy Z Fold 4. Moreover, the tipster shares that the device may carry highest 108MP primary camera sensor. However, there is no confirmation on the report from the company. But, if it’s true then the company will be able to overcome the biggest withdraw of foldable flagship.

Moreover, there is leak supporting the previous reports that the device will have similar 10MP telephoto sensor with 3x optical zoom. In addition, the device may also have front camera similar to Galaxy S22 series. Furthermore, the earlier report suggest that the device will get built in S pen slot and more.